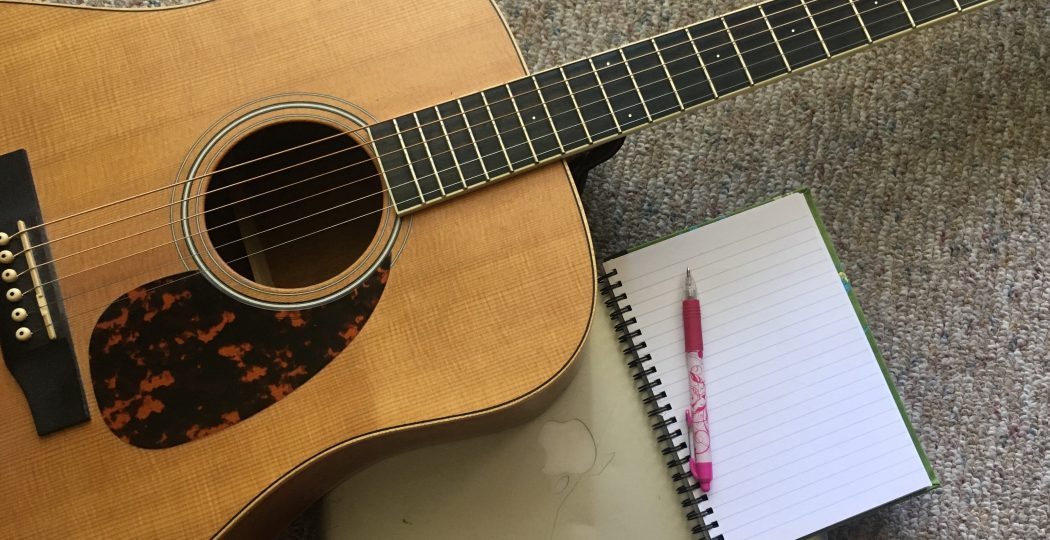 Sometimes it ebbs and sometimes it flows… this month the inspiration hit and it kept coming!

I wrote two new songs this month and, man, did it ever feel good! It’s such a catharsis when I put the guitar down after an entire day obsessing over chord structure, arrangement, lyrics, emphasis, metering, etc. It feels soooo amazing when the song is finished!

Some songs take time to steep, like tea, until they’re perfect. Others are written in as much time it takes to put pen to paper.

The first song steeped like a tea. I had many different lyrical lines in it at the time of first writing it, and after walking away and coming back to it, I rewrote the first verse (almost in its entirety) and now it finally feels “done”. The song is about how when things get really difficult, we need to look to what is important in our lives and seek out the things (and sometimes people) that centre us. For me, this usually entails a trip to the beach to sit, take in the salt air and watch the waves roll in.

The second song I wrote was during that break between first and second drafts of All I Need. This song was a gem in the way it presented itself. I’ve always said “I don’t write songs, songs write themselves through me… I’m just the vehicle through which they do it”. This song wrote itself faster than a hot rod speeding down a freeway (I’m imagining that to be very fast)… to be honest, I didn’t even know what it was about until after it was written. It was awesome! I love it when a song does that.

“Up” is about acknowledging when a relationship isn’t the healthiest for you, and why. I have said in previous posts about how I love to surround myself with loving, supportive, encouraging people… and because I do that (for the most part), it becomes very obvious when someone isn’t fitting in with the status quo. It’s also about my desire to continue building other people up, because that’s a show of love, not just for the other person but also for ourselves. It’s a way of acknowledging that we are confident enough in ourselves to know that raising another person up does not diminish our own value.

With a whisper-to-a-scream voice and anthemic compositions, Nicola Linde is a singer-songwriter with an edge. Nicola's material speaks the truth of life today in a way that transcends gender. Love, career, interpersonal relationships, soul-searching and triumph find their voice embedded within her song-craft. Nicola Linde creates a sound that ranges from aggressive, to ethereal, to wistful, while always maintaining a captivating intensity. Originally from Victoria, BC, Canada, Nicola Linde has opened for Juno Award winners, certified Platinum selling bands, Top 40 artists and Canadian Music Hall of Fame inductees. Nicola Linde moved to Tacoma, WA, USA, as a 90-day fiancée in September 2018 and married Tacoma-based singer-songwriter, Dave Hannon, in November 2018. She is excited, yet humbled, to be included in the incredibly talented, positive and supportive music scene in the Tacoma, WA, area. Her full-band EP "Sightline" (released in 2017) is available on most download and streaming platforms.